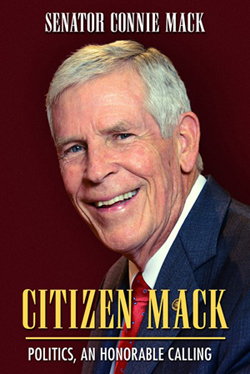 Connie Mack, a former U.S. senator, a crusader against cancer, and a dedicated father has had many fantastic titles throughout his life and career, but his title of choice remains: citizen.

Honest and heartening, Citizen Mack: Politics, an Honorable Calling is Senator Mack’s memoir of an 18-year journey to and from Capitol Hill. After a family death in Florida and the realization that his greatest desire was to serve others and run for office, Mack packed his bags and moved his family to D.C. to serve as a representative and eventually a senator for Florida.

Alongside the likes of John McCain, Joe Lieberman and Newt Gingrich, Mack helped usher in the turn of the century. From speaking at the National Prayer Breakfast, addressing the American Israel Public Affairs Committee, casting historic votes on the issues of sending troops to war, to the impeachment of a president and the nomination of a controversial Supreme Court justice, Mack’s account of his time in office is captivating and gives outsiders a front row seat to the world of Washington D.C.

Threaded with candid stories, Citizen Mack encourages anyone considering a life in politics to do so with passion, and most importantly, with the motivation of improving people’s lives. Mack believes in serving one’s country and always maintaining humility by remembering that you are, first and foremost, a citizen.

"Connie Mack’s account of his spiritual journey is honest, humble, and explains much about the man and his life of service."
— DICK CHENEY | 46TH VICE PRESIDENT OF THE UNITED STATES

"Citizen Mack is a remarkable book by a remarkable leader."
— NEWT GINGRICH | 50TH SPEAKER OF THE UNITED STATES HOUSE OF REPRESENTATIVES

"When I was diagnosed with Cancer in 1995, then Senator Connie Mack, who I hardly knew, called me to say “Don’t worry Sam, I had the same thing and I’m okay now – you will be, too.” Can you imagine what that did for me? For more on how this wonderful man has helped people through a lifetime of self- less public service, read his story, Citizen Mack, and consider how times have changed."
— SAM DONALDSON | ABC NEWS

"Citizen Mack is the story of a life of public service — and a lot more. I was privileged to serve with Connie in the U.S. Senate and can tell you his own service validates his belief that ‘politics is an honorable calling."
— JOE LIEBERMAN | FORMER UNITED STATES SENATOR

"Citizen Mack is an important memoir of one of the most honorable men who has ever served in the Senate of the United States. Connie Mack’s memoir is a call to return to civil discourse and respect for those who think differently from you. This book is a story of a man who never stopped growing in knowledge, peace, and care for others."
— MICHAEL TIMMIS | CHAIRMAN EMERITUS, PRISON FELLOWSHIP INTERNATIONAL; AUTHOR OF TWO WORLDS: THE SPIRITUAL JOURNEY OF AN EVANGELICAL CATHOLIC