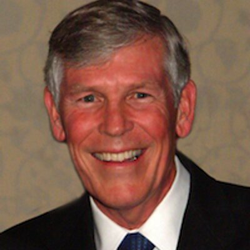 In 1982, Connie Mack left a successful banking career to run for the House of Representatives, where he served three terms before running for one of Florida’s seats in the U.S. Senate. He served two terms there, then chose not to run for reelection. On returning to the private sector, Mack became Chairman, and then Chairman Emeritus, of the H. Lee Moffitt Comprehensive Cancer Center in Tampa.

Mack and his wife, Priscilla, divide their time between Florida and Vermont. They have two children, six grandchildren, and two great-grandchildren. Mack is the grandson, and namesake, of the Hall of Fame baseball figure who managed teams to major league records in total wins. His grandfather on his mother’s side, Morris Sheppard, served as a U.S. senator from Texas from 1913 until 1941.

What inspired you to write this book?
"I spent an interesting 18 years in the House and the Senate, and there was a lot that happened that I knew was worth sharing. And, then, in the years after I left politics, many people said to me, “You should write a book.” Also, my grandfather, Morris Sheppard, had served almost 40 years in Congress, and I often found myself thinking, “I wish he had written a book.” Opportunity came along in the form of a friend who had written a book. I was curious as to who had helped him, and he introduced me to Geoffrey Norman, who had written 20 books under his own name and another half dozen as a consultant and ghost writer. We connected, and the rest, as they say, is history."

In what ways did your involvement in politics affect your home and family life?
"It changed almost everything. We moved to Washington, leaving our daughter behind with her family, and our son changed schools ... twice. At first, my wife, Priscilla, was isolated and lonely, but she eventually found her own calling as a result of her breast cancer fight and recovery. She became a terrifically effective and energetic advocate and activist in the war on cancer. Especially in the National Race for the Cure. Still, our life as a family was dominated by the demands of my position, and we gave up our privacy almost completely. Not just me, but all of us."

What advice would you have for someone considering a political career?
"Pursue it! The pathways into politics and elected office are almost unlimited. The law, community involvement, party activity ... but whatever route someone takes, the motivation and focus should always be service to others."